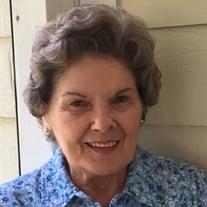 Bettie A. Robinson, 90 of Oak Island, NC, formerly of Vienna, and Welch, WV, died on January 9, 2020 after suffering a stroke. Bettie is survived by her daughter, Debbie Atwell (William) and grand-daughter, Elizabeth Brumley (Justin), and great grandson, Atwell; several nephews, nieces and grand nephews and nieces. She was preceded in death by her parents, Sessie Blankenship Ranzo and Frank Ranzo (Franco Giallorenzo) of Welch, WV and husband, William L. Robinson, Vienna, WV; sisters (Lillian and Geneva) and brothers (Douglas and Jack). Bettie was born on May 16, 1929 in Welch, WV to a mother from one of the early pioneer families in the area and an Italian emigrant. She lived on the farm learning the techniques of farming and animal husbandry during the Great Depression. When she was a teenager, her family bought a dairy farm in New York and she moved there with them. Returning to Welch, she graduated from Welch High School and worked as a clerical aid and secretary. After marrying she moved to Pulaski, Virginia with her husband and daughter. There she worked in the Tax Office of the Pulaski County Court House. After returning to Welch, she married Bill Robinson and worked at the Foremost Milk Company until its headquarters moved to Bristol, TN. She then worked in administration at the McDowell County Jail. After retiring she relocated to Vienna, WV to be near her daughter and granddaughter. She was a long-serving volunteer at St Joseph's Hospital in Parkersburg, WV and was an active member of First United Methodist Church, Parkersburg, WV. She frequently attended United Methodist Churches in the Oak Island/Southport area. She was proud of her native state, studying its history and its people. She subscribed to several publications about the state: Goldenseal, the magazine of West Virginia traditional life, Wonderful West Virginia Magazine, and The official West Virginia Page for OnlyInYourState. Bettie was very fond of art glass especially art glass made in West Virginia. She collected several pieces and enjoyed learning and sharing the history of the glass factories in West Virginia. Bettie enjoyed photography and was an avid photographer, documenting the many changes in rural settings of the areas she visited. She was a very special and loving person who ensured that those she met were special too. She will be greatly missed but the love that she brought to all will live on. A Celebration of Bettie's life will be held Friday January 17, 2020 at 2:00 PM in the Chapel of Roselawn Funeral Home with Rev. Dr. Timothy Allen officiating. The family will receive friends from 1:00PM-2:00PM on Friday at the funeral home. In lieu of flowers, memorial donations of sympathy may be made in Bettie's name to the Lower Cape Fear LifeCare, 1414 Physicians Drive, Wilmington, NC 28401. Roselawn Funeral Home 450 Courthouse Rd in Princeton is serving the Robinson Family

Bettie A. Robinson, 90 of Oak Island, NC, formerly of Vienna, and Welch, WV, died on January 9, 2020 after suffering a stroke. Bettie is survived by her daughter, Debbie Atwell (William) and grand-daughter, Elizabeth Brumley (Justin), and... View Obituary & Service Information

The family of BETTIE ROBINSON created this Life Tributes page to make it easy to share your memories.

Send flowers to the ROBINSON family.