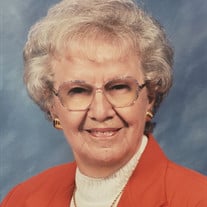 Bernice Byrd Hawkins, 98 of Deland, FL passed away on March 10, 2020 after an extended illness. She was born on January 1, 1922 in Princeton, WV to the late Leftwhich and Viola Byrd Carbaugh. Bernice was a member of the Greenview United Methodist Church in which she was very involved until she relocated to Florida with her son. Bernice received an Associates Degree in Business and worked as a loan officer for SunTrust Bank for many years. Bernice was active as a circle leader in her church, she always sent cards to the members of the church who were ill and unable to attend, and she was a loyal member of her Sunday School class. Bernice was very crafty and took much pride in crocheting pillows and throws, planting gardens, and growing flowers. In addition to her parents, Bernice is preceded in death by her loving husband, Harry C. Hawkins Sr., two brothers, James Carbaugh and L.E. Carbaugh, two sisters, Dean Suttor and Julia Linkous. Those left to cherish her memory include her only son, Harry Hawkins Jr. and wife Jamie of Deland, FL, one brother, Richard Carbough and one sister, Zelpha Frye and husband Carol of Princeton, WV, two grandchildren, Jason Hawkins and wife Kathline of FL, and Jennifer Wigle and husband James of GA, five great- grandchildren, Alex, Mark and James Hawkins, Sarah and Alex Wigle. In lieu of flowers, the family requests that donations be made to Greenview United Methodist Church 600 Blue Prince Road Bluefield, WV 24701. At the request of the family, there will be no services at this time. An online obituary and guest book may be signed by visiting roselawnmontevista.com Roselawn Funeral Home 450 Courthouse Road on Princeton is serving the Hawkins Family

Bernice Byrd Hawkins, 98 of Deland, FL passed away on March 10, 2020 after an extended illness. She was born on January 1, 1922 in Princeton, WV to the late Leftwhich and Viola Byrd Carbaugh. Bernice was a member of the Greenview United Methodist... View Obituary & Service Information

The family of Bernice Byrd Hawkins created this Life Tributes page to make it easy to share your memories.

Send flowers to the Hawkins family.