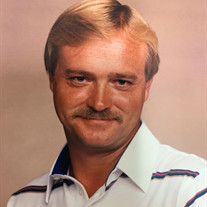 Mr. Danny Roy Compton 68 passed away Saturday September 21, 2019 surrounded by his loving family, following an extended illness. He was born October 27, 1950 in Princeton to the Late Roy and Nana Lou Asbury Compton. Mr. Compton was a former Mercer County Deputy Sherriff, a heating and cooling technician, and a school bus driver for Mercer County Schools. He was of the Christian Faith, and a 35 year member of the Princeton Elks Lodge #1459. He enjoyed golf, fishing, playing cards, watching Westerns on tv, and being with his family, especially his grandchildren. In addition to his parents, he was preceded in death by a daughter Amy D. Compton and a brother-in-law Sammy Meadows. Survivors include his wife of 51 years Sue Stewart Compton of the residence, one daughter Michelle Ramsey and husband Mark of Unicoi, TN, one sister Debbie Meadows of Princeton, four grandchildren Krista Johnson, Chad Casey, Joshua McCoy, and Taylor Ramsey, one great grandchild Andrew Larose, his two doggies Chloie and Sissy, and several nieces, nephews, cousins and friends. A Memorial Celebration of Danny's life will be held on Friday September 27, 2019 at 6:00pm conducted by Chaplain CT Lilly, III. The family will receive friends from 5:00pm until time of the service on Friday at the funeral home.

The family of Danny Compton created this Life Tributes page to make it easy to share your memories.

Send flowers to the Compton family.