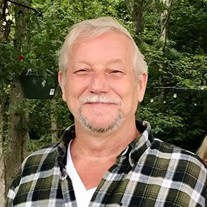 Mr. Jack Belcher, (AKA "Papa Jackie" or "PJ"), son of the late Wiley and Bertha Belcher was born on February 9, 1952 in Welch, West Virginia. He attended North Fork High School, and was highly accomplished in multiple trades such as Drywall Finishing, Tool and Die repair, and Die Engineering. Jack passed away peacefully, albeit tragically on August 14, 2021 at 5:46am in the presence of family. Jack enjoyed very simple things in life the most, and was often described by others as a very simple man, accordingly. He was a gifted musician, and gave back to God those gifts in church services. He played guitar and other stringed instruments, he was a skilled woodworker, gardener, carpenter, and cook, but most importantly a gifted and loving Father. Jack didn't just care after his own family, he was a mentor and friend to everyone that knew him. Jack reflected virtues as a human being, that would typically only be expected from our heavenly Father. He has been described as humble, loving, caring, giving, hard working, a Godly man - and many say simply "The best man I ever knew". He made it clear he loved and appreciated his Lord, and the beauty of God's creation. He loved every color, flower, and whatever sparkled. He loved family gatherings, Christmas time, old and new trucks, guns and knives, fishing, and much more. Above all else on earth however - he loved his family with everything within him. He will be missed tremendously by so many that loved, and knew him. Jack was preceded in death by his first wife Anita, parents Wiley and Bertha, Brothers Edward, Robert, Bobby, and sisters Gail, and Barbara. Jack is survived by his wife Meta Jo, brothers Wiley and Billy, sisters Judy and Linda. Jack has many children, in no particular order Jackie and Stacey, Ginger and Michael, Aaron and Crystal, Benjamin and Christine, Cody, Alicia, Jennifer and Dan, Chad and Brittany, Shelley and Jeff, Clint and Kari, Grandchildren Kylie, Noah, River, Kaley, Alyssa, Sarah, Jackie Jr., Mckinley, Wiley James, Avery, Autumn G., Benjamin Jr., Loretta, Hannah, Autumn, Abigail, Dalton, Jake, Kate, Eli, Sophie, Troy, Macie, and Rubie. Great Grandchildren Navy, August, Beckham, Bowie, Rory, Rowan, Adelaide, Avery H., and very soon baby Leon. Visitation will be held on Friday, August 20th, 2021 from 10:00 AM - 12:00 PM at Roselawn Funeral Home and Cemetery in Princeton, WV. A Reflection of Jack's lifetime will immediately follow at 12:00 PM. Burial will immediately follow at Roselawn Cemetery. Roselawn Funeral Home and Cemetery is honored to be serving the Belcher family.

Mr. Jack Belcher, (AKA "Papa Jackie" or "PJ"), son of the late Wiley and Bertha Belcher was born on February 9, 1952 in Welch, West Virginia. He attended North Fork High School, and was highly accomplished in multiple trades such as Drywall... View Obituary & Service Information

The family of Jackie Belcher created this Life Tributes page to make it easy to share your memories.

Send flowers to the Belcher family.