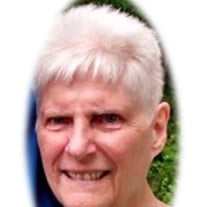 Mary Fulton Rumple Smith, 80, of Odd, WV went home to be with the Lord on Saturday, January 23, 2021 with her family by her side, after a short battle with cancer. Mary was born in Harrells Store, in Sampson County, NC on May 18, 1940 to the late Pressley Paul and Mildred Ardella McGill Rumple. She was preceded in death by her beloved husband of 60 years, Daniel Patrick Smith, Sr.,her parents, her older sister Joan Rumple, her in-laws, Augustus Buxton and Evelyn Benson Smith, and her daughter Pamela Shrewsberry. Surviving are her son, Daniel P. Smith, Jr. (Ruth) of Rocky Mount, VA; son-in-law, Paris Shrewsberry of Flat Top, WV; son, Gary T. Smith (Angela) of Christiansburg, VA. She is also survived by her grandchildren, Tessa (Samuel) Thompson, Paris O. (Alisia) Shrewsberry, Jr.; Allison Smith, Joanne (James) Hampton; Carrie (Christopher) Millington, and Emily Smith; great-grandchildren; Lee, D.J., and Michael Thompson, Jayden Millington and Colt Shrewsberry; sisters Patty Lewis and Cynthia McKitrick, both of Wilmington, NC, brother Paul Rumple (Elizabeth) of Charleston, SC, brother-in-law James Smith of Poquoson, VA and sister-in-law Dottie Smith of Salem, VA as well as multiple nieces and nephews whom she loved dearly. Mary enjoyed piddling in her kitchen and playing games with her family (especially cards) and making crafts including crocheted rugs and dish rags, which she loved giving to everyone. Mary was a homemaker who committed herself to her husband and children. She never learned to drive an automobile, claiming, when Dan was trying to teach her, she almost hit a truck and a cyclist at the same time. She especially enjoyed doting on her grandchildren and great-grandchildren. She will forever be remembered as a faithful, loving wife, dedicated, caring mother, grandmother, great-grandmother, sister, aunt and friend. The family plans to have a combined memorial service for Mary and Dan in May 2021. Further arrangements will be communicated at a later date. In lieu of flowers, the family asks that donations in memory of both Mary and Dan be sent to: Ghent Volunteer Fire Department, 2651 Flat Top Rd., Ghent, WV 25843. Private online condolences and other expressions of sympathy may be directed to the family via our guestbook at https://www.roselawnmontevista.com

Mary Fulton Rumple Smith, 80, of Odd, WV went home to be with the Lord on Saturday, January 23, 2021 with her family by her side, after a short battle with cancer. Mary was born in Harrells Store, in Sampson County, NC on May 18, 1940 to the... View Obituary & Service Information

The family of Mary Smith created this Life Tributes page to make it easy to share your memories.

Send flowers to the Smith family.