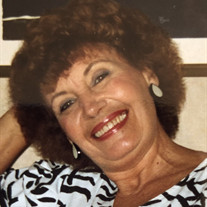 Ruby Marie Ellison Peery of Bluefield passed away Wednesday January 29, 2020 at the age of 92. She was born on October 28, 1927 in Mohegan, WV to the late Arnett Ellison and Mabel Lake Morgan. Raised by her grandparents after her 20-year old mother's death when she was only 3 years old, Ruby valued family above everything else and was always there for her family whenever there was a need. She grew up with young aunts and uncles, who were like brothers and sisters, and always said that she and her brother Carl were never treated any differently than her grandparent's own children. Coming from a talented musical family, she sang live on the radio at WELC in Welch and never lost her passion for music. Even in her 90s, struggling with dementia, she could remember every lyric to every song/hymn she had ever known. When she was fourteen, Ruby moved from Mohegan to the hustle and bustle of a 1940's Bluefield. Later she became an elevator operator in the Coal and Coke Building downtown. One day during her lunch hour, she was walking down the street when a handsome young business student saw her and told his buddy next to him, "That's the woman I'm going to marry!!" And he did! Six weeks after their first date Ruby Ellison and Glen Peery became husband and wife. They lived in Bluefield with their three children until 1968, then moved to Orlando, FL where they spent the next 30 years. Ruby worked as a nurse at Florida Hospital in Orlando for 25 years. As a woman of exquisite taste, she loved decorating (almost always in white), entertaining and anything that involved interior design. After Glen's death in 1993 and her son's death in 1997, Ruby returned to Bluefield and back into the arms of the family she loved. Ruby was devoted to her three children. Her eldest, Dreama, grew up to become an actress and an award-winning children's book author. Dreama gave her a 'dream' son-in-law in Bob Denver, who starred in Gilligan's Island, and a grandson, Colin, whom she adored. Her oldest son Eddie was her golden child, made all the more special when he was born on her birthday. He gave her a wonderful daughter-in-law, Kathy, and two incredible grandsons, Brian and Michael. Her youngest son Ron was, not only her baby, but the light of her life and one of her very best friends. His passing 22 years ago at the age of 31 was something from which she never fully recovered. Ruby Marie Peery was a true woman of strength. She loved with everything she had and faced life's challenges head-on. She started her life in a WV 'holler', washing with water from rain barrels, using outhouses and walking miles to her one-room schoolhouse. But through it all, she was surrounded by the love of her grandparents and her 'honorary' siblings. Her family gave her strength. Ruby's death marks the end of an era in the family; she was the last surviving member of her generation of Ellison/Morgans. The thought of the reunion she's experiencing now with the mother she never knew and the son for whom she grieved, the music they're all playing and singing, the joy they must be feeling at being together once again - the thought of all of that gives the surviving family members peace. In addition to her parents, Ruby was preceded in death by her husband, Glen E. Peery, her youngest child Ron Peery, her brother Carl Ellison, her aunt Martha Fleenor, her uncle Ray Morgan and her sister-in-law Charlotte Mitchell. Those left to cherish her memory are her daughter Dreama Denver of Princeton, her son Eddie Peery of Hendersonville, TN, her brother Denny Ellison of Ft. Meyers, FL; three grandsons, Colin Denver of Princeton, Brian Peery of Knoxville, TN and Michael Peery of Memphis, TN, her much-loved cousins Brenda Neal and Tammy Fleenor of Bluefield and her brother-in-law Tom Mitchell of Charleston. A Celebration of Ruby's Life will be held at a later date. Roselawn Funeral Home 450 Courthouse Road is serving the Peery family.

Ruby Marie Ellison Peery of Bluefield passed away Wednesday January 29, 2020 at the age of 92. She was born on October 28, 1927 in Mohegan, WV to the late Arnett Ellison and Mabel Lake Morgan. Raised by her grandparents after her 20-year old... View Obituary & Service Information

The family of Ruby M Peery created this Life Tributes page to make it easy to share your memories.

Send flowers to the Peery family.