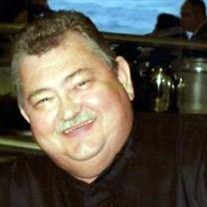 REV. STEVEN WEBSTER RUNNION Rev. Steven Webster Runnion, 69, of Princeton, WV passed away, Tuesday, April 30, 2019 at Charleston Memorial Hospital. He was preceded in death by his parents, Harry and Edith Runnion of Roane County. Rev. Runnion began his career in Washington, DC with the FBI, and then went into construction until his call into the ministry in 1976 with the WV Methodist Conference as an Elder serving all over the WV Conference. Rev. Runnion graduated from Spencer High School, and Duke Course of Study in 1981, Regents B.A. from Fairmont State College, Masters of Divinity from the Methodist Theological School in Ohio. He pastored 9 different charges throughout West Virginia. He was a member of the Monroe Lodge #77 in Union, WV where he served as Grand Master as well. Survivors include his loving wife of 27 years, Rev. Patty Runnion; children, Matthew Runnion of Lewisburg, Mark Runnion and wife, Heather of Morgantown, Tracy Runnion of Morgantown, and Amy Jo Sutton and husband, DJ of Fairmont; five grandchildren, Luke, Jacob, Steven, Caitlynn, and Kayla; brother, Brad Runnion and wife, Frankie of Shinston; several cousins, nieces, nephews, extended family and friends. Services to celebrate the life of Rev. Steven Webster Runnion will be held 12:00PM Monday, May 6, 2019 at Roselawn Funeral Home, Princeton with Rev. Mark Flynn and Rev. Betty Shields officiating. Following the services, Rev. Runnion will be laid to rest at Roselawn Memorial Gardens, Princeton. Mark Runnion, Matt Runnion, Steven Runnion, DJ Sutton, Darrin Porter, and David Baker will be serving as pallbearers. Friends may gather with the family from 6:00PM until 8:00PM Sunday, May 5, 2019 at Roselawn Funeral Home, Princeton. Online condolences and other information can be found by visiting www.roselawnfuneral.com. The family would like to say "Thank You" to the staff at Charleston Area Medical Center Memorial Division CPICU 5th floor Medical and Nursing Staff for the care and compassion they shown. In lieu of flowers, the family requests donations of sympathy be made in his honor to the American Kidney Foundation or the Mount Horeb United Methodist Church. Roselawn Funeral Home and Memorial Gardens, 450 Courthouse Road, Princeton is honored to be serving the family.

The family of Rev. Steven Webster Runnion created this Life Tributes page to make it easy to share your memories.

Send flowers to the Runnion family.