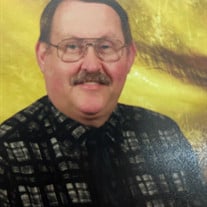 Clyde Edward Cooper, 73, of Princeton, entered his eternal heavenly home on Sunday, November 29th, 2020. Clyde was born on October 17th, 1947, in Welch, West Virginia, to the late Kenneth Cooper and Effie Bishop. He was preceded in death by his brothers, Doug and Curtis Cooper, and his sister, Huberta Cooper. Clyde enjoyed many things including going out to eat, singing songs and playing the guitar, and watching his favorite football team, the Dallas Cowboys. Above all, he loved his family and would do anything for them. When he was not working hard as a machine operator at Bluefield Beverage, he was working harder as a minister at the Church of God, showing his faith for 40 years. Clyde is survived by his loving wife of 39 years, Brenda Cooper; his son and daughter-in-law, Joseph and Jessica Cooper; his daughter and son-in-law, Tammy and Robert Gross; sisters, Katrina Steele and Arlene Whittaker; grandchildren, Laci Cooper and Anna Adkins; and his four-legged companion, Skit. Funeral Services will be held at 2pm Thursday, December 3rd, 2020 at Roselawn Funeral Home with the Reverends Ray Hurt and Ron Miller officiating. Friends may call one hour prior to Service; entombment will follow in Roselawn Memorial Gardens. Roselawn Funeral Home Princeton, is in charge of the arrangements.

The family of Clyde Cooper created this Life Tributes page to make it easy to share your memories.

Send flowers to the Cooper family.