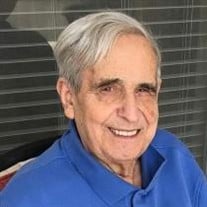 Frank Sherman Fletcher, 88, of Dublin Ohio, passed away peacefully June 19, 2019 surrounded by his loving family and the caring staff of Dublin Methodist Hospital in Dublin Ohio. Born in Princeton, West Virginia, Frank was the son of the late Victor A. Fletcher Sr. and Etsa K. Fletcher. Frank is the last of 10 siblings that grew up, lived, loved and worked on the Fletcher family farm in Princeton. He is preceded in death by his wife Peggy Ann (Stratton), his beloved nephew James (Jimmy) Fletcher as well as his six brothers and four sisters. He is survived by his daughter Dianna of Scarborough, Maine, his son Darrell and his wife Julie (Pelton) of Dublin, Ohio as well as four grandchildren; J.D. Fletcher, Will Fletcher, Eryn Simons and Andrew Simons. His beloved niece, Margaret and her brother Mark and his wife Debby also survive Frank. Dublin became his home in 2007 and Frank was blessed to have a large extended family and the caring love of the Indian Run Methodist Church congregation. His extended family in Dublin includes the Pelton family; John and Beverly Pelton (who passed away in 2014), his daughter Stacie and Laurie (Pelton) Coon, and the entire Coon family; Mick, Tom and Michael. Frank enjoyed many good times and holidays with his extended family. Frank graduated from Princeton High School in 1949. He had a life-long friendship with Barnes Harold; the two attended school together in Princeton. Frank and Peggy were very close with Barnes and his wife Dorothy. Frank lived most of his life in Brunswick Ohio, working for 34 years at Ford Motor Company in Brook Park. He was very proud of his hard work and a remained a loyal Ford car owner over his lifetime. Frank enjoyed going to Cleveland Indians and Ohio State games with Darrell, Julie and his grandsons JD and Will. Frank and Peggy enjoyed traveling to Maine to visit Dianna, Eryn and Andrew. He enjoyed visiting the cold ocean beaches and eating seafood. He also enjoyed listening to old-time gospel hymnals, which he listened to until his peaceful passing. Frank was known for his quick-witted West Virginia humor that made his family laugh. Understated, extremely hard working and unselfish, one of the most genuinely kind people you would ever meet. Family and friends will be celebrating Frank's life at a memorial service at Indian Run Methodist Church, 6305 Brand Road, Dublin Ohio on Saturday June 22nd at 2pm. Frank will be buried in a private service with family on Monday, June 24th at Roselawn Memorial Gardens and Funeral Home, 450 Courthouse Rd, Princeton, West Virginia. Family requests in lieu of flowers, contributions can be made in Frank's memory to the Alzheimer's Association or the Indian Run Methodist Church.

Frank Sherman Fletcher, 88, of Dublin Ohio, passed away peacefully June 19, 2019 surrounded by his loving family and the caring staff of Dublin Methodist Hospital in Dublin Ohio. Born in Princeton, West Virginia, Frank was the son of the late... View Obituary & Service Information

The family of Frank Sherman Fletcher created this Life Tributes page to make it easy to share your memories.

Send flowers to the Fletcher family.