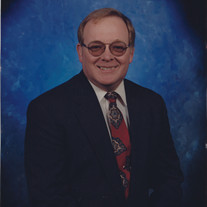 On September 5, 2019, Larry William McClintock, passed away at home surrounded by family and friends. Larry was born in Reidsville, NC to Carl and Estelle McClintock in 1952. He was the second child with an older sister, Chris, and a younger brother, Mark. Larry spent his early years in Reidsville, graduating from Reidsville High School in 1970. In the years that followed he worked as a pioneer minister of Jehovah's Witnesses, welder, engineer, and Safety Director. After moving to Virginia, he met and married Sally Franklin. Together they raised their daughter, Crystal, in a home filled with love and appreciation of the wonderful gifts of Jehovah God. Larry was known for his great sense of humor, his kind heart, his "I never meet a stranger" philosophy, his love of animals, and his helpful attitude to others. He was an elder with the local congregation of Jehovah's Witnesses where he made many friends and served faithfully until his death. He was a lifelong member of the Bluefield Rescue Squad and remembered for the rescue of a duck caught by fishing line which began his life-long duck collection. He retired from Swope Construction due to his devasting illness. Larry will be deeply missed by his family and friends. They will be losing a good listener, an insightful advisor, a loving husband, a good friend, and a great father and grandfather. He is preceded in death by his father, Carl, mother, Estelle, and son Keith Oakes. He is survived by his wife of 43 years, Sally, his daughter, Crystal Robinson and husband Ben, grandchildren Kaylah, Alexander, and Serenity, his brother, Mark McClintock and wife Sarah, sister Chris Hardiman and husband Robert, and numerous nephews and nieces. Visitation with family will be on Saturday September 14, 2019 at 1:00 pm at the Kingdom Hall of Jehovah's Witnesses in Bluefield, W.Va. with memorial service to follow at 2:00 pm officiated by Kermit Fowler. In lieu of flowers, please make donations to family to help cover medical expenses. Roselawn Funeral Home of Princeton is serving the McClintock Family

On September 5, 2019, Larry William McClintock, passed away at home surrounded by family and friends. Larry was born in Reidsville, NC to Carl and Estelle McClintock in 1952. He was the second child with an older sister, Chris, and a younger... View Obituary & Service Information

The family of Larry W Mcclintock created this Life Tributes page to make it easy to share your memories.

Send flowers to the Mcclintock family.