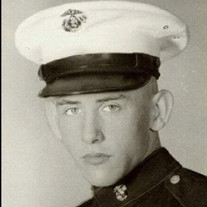 Mr. William Travis Davis, III 77 of Princeton, formerly of Mullens, passed away Monday September 16, 2019 following a short illness. He was born January 10, 1942 in Mullens to the late William Travis Davis, Jr. and Ruth Wolford Davis. Mr. Davis served his country in the United States Marine Corps. He was a member of Princeton VVVA Chapter 628, former member of the Wyoming County Honor Guard where he presented the colors for local football games. Mr. Davis attended Salvation Through Christ Church in Princeton, and was a former member of Pierpoint Baptist Church in Mullens. He retired from Norfolk and Southern Railroad after many years of service, and enjoyed being with his family, especially his grandchildren. In addition to his parents, Mr. Davis was preceded in death by a son Robert Davis, two sisters, Millicent Smith and Beth Thompson, and his faithful fur baby Gizzy. Survivors include his wife of 52 years Brenda Rose Davis of the Residence, one son Travis Davis and Wife Amanda of Mullens, one daughter Melissa Dye and husband Tim of Dallas, Georgia one sister Becky Fulford of Mullens, three grandsons Huston Harden, Brandon Dye, and Travis Davis, one granddaughter Reed Jedra and her husband Jordan, and one great granddaughter Sierra Harden, and a sister-in-law Lisa Goode of Starke, FL. A Celebration of William's life will be conducted at 2:00PM Friday September 20, 2019 in the chapel of Roselawn Funeral Home in Princeton with Rev. Roger Lusk and Rev. Butch Accord officiating. Burial will follow in Roselawn Cemetery in Princeton with military graveside honors by Princeton VVA Chapter 628. Family will serve as pallbearers. The family will receive friends from 1:00PM until time of the service on Friday at the funeral home. Roselawn Funeral Home and Cemetery of Princeton is serving the Davis Family

The family of William Travis Davis III created this Life Tributes page to make it easy to share your memories.

Send flowers to the Davis family.